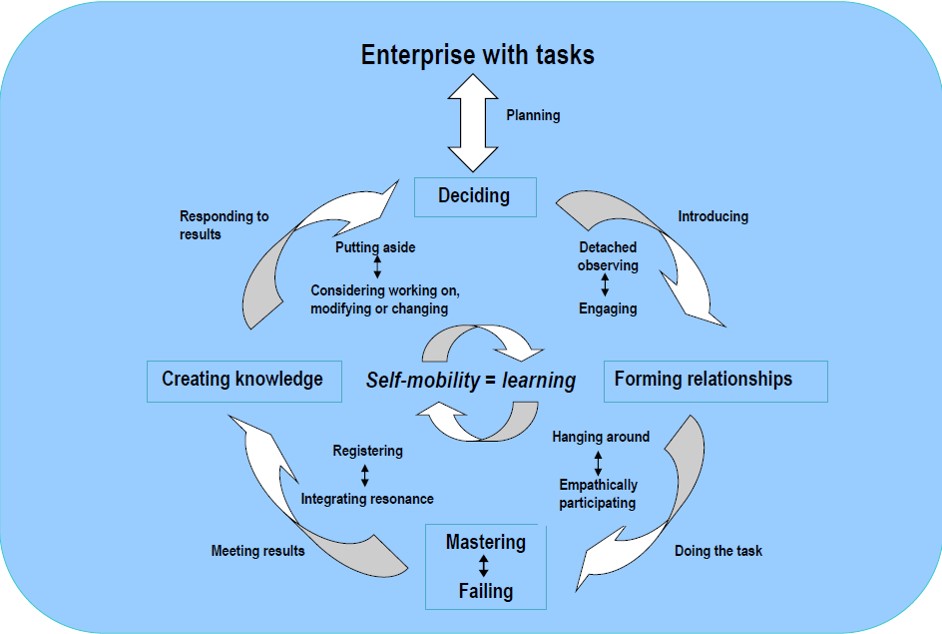 Within the grey field representing the enterprise, the first step is taking on a task. Through the work, relationships will be built between the pupil and the task before the pupil experiences a degree of mastery or failure and comes to a realization of his/her capability on the basis of the result. After the task is completed, the pupil has a basis on which to decide on a new and probably modified attempt at the task. Within the circle, the inner processes of learning are described, whereas the stages of the task are indicated on the outside of the circle. According to a relational approach, the concrete, outer stages of a process will always correspond to an inner process in the person who participates in the task. The teacher’s or  instructor’s responsibility is to calibrate the outer demands in order to facilitate an inner learning process in the pupil.

The right side of the model places emphasis on the building of relationships and awakening
the will. Reflections and thoughts will always be a part of human activity, but in this part of
the learning circle, the main emphasis is on motivation for participation and development of a
multitude of connections to the task and the co-workers through the work. The pupil must
often overcome resistance in order to carry out the task. Different aspects of the will, such as
patience, perseverance, courage, discipline and resolution are generally invoked in such tasks.
In the Living School projects, the learning and the training of the will is connected to
cooperation between pupils and between teachers/instructors and pupils. The will to
cooperate is a fundament for social sustainability.
On the left side of the model, the emphasis is on comprehension, reflection and self-efficacy.
Insight into and connection to a meaningful task creates the potential to stimulate reflection in
the pupil. Bråten (2007) uses the concept of resonance to point out that the activity and the
result reverberate in the learner and stirs him/her to both reflection and understanding. The
result can be that the learner has acquired enough knowledge and skill that he/she is confident
about doing the task. The learner can want to learn more about the task in the course of the
process and even have new ideas about a better way to do it. Since the connection to the task
is already established and the will is focused on the task, the processes on the left side of the
model potentially lead to a feeling of empowerment and self-efficacy for the learner. This in
turn is a foundation for deciding that he/she will lead the task the next time and serve as an
instructor for others.
The model for relationship-based experiential learning is a model for empowerment, for
development of cooperation and self-efficacy and for expanding reflections. Empowerment,
self-efficacy, cooperation and a broader experience for reflections are four necessary pillars
for sustainable development. Pedagogical work in gardens and in farm-school projects fosters
the values of sustainable development in young learners. These arenas have inspired us to
develop a model for learning. Pupils who learn in this way are often inspired to engage
actively in issues of sustainability.
References
Antonovsky, A. (1987) Unravelling the mystery of Health – How people manage stress and stay well.
San Francisco, Jossey-Bass.
Assagioli, R. (1973) The Act of Will. New York: Viking/ Penguin.
Bandura, A. (1986) The Social Foundations of Thought and Action: A Social Cognitive
Theory.Engelwood Cliffs,N.J.: Prentice-Hall.
Bell, A.C. and Dyment, J.E. (2008) “Grounds for Health: the intersection between green school
grounds and health-promoting schools. Environmental Education Research, 14(1), 77-90.
Blair, D. (2009) “The Child in the Garden: an evaluative review of the benefits of school gardening”.
Jounrnal of Environmental Education, 40(2), 15-30.
Bråten, S. (2007) Kommunikasjon og samspill – fra fødsel til alderdom. Oslo, Universitetsforlaget.
9
Carsen, R. (1965) The Sense of Wonder. New York, Harper and Row Publishers
Chawla, L. (1998). “Significant Life Experiences Revisited: A review of Research on Sources
of Environmental Sensitivity.” Environmental Education Research, 4(4), s. 369-382.
Dewey, J. (1938, 1974). Erfaring og oppdragelse. Christian Ejlers, København.
Haubenhofer, D., J. Hassink, I., van der Meer, N. van de Kamp, E. Schreurs and Y. Schuler
(2011) “Results of a Dutch effect study on different farm education programs”. In J.
Schockemöhle (ed.): Conference Proceedings, First Conference of the Academic Initiative on
Farms as Sites of Learning 2010. Academic foundation of learning on Farms, June 10-12.
2010. Altenkirchen (Ww.), Evangelische Landjugendakademie Altenkirchen, pp. 21-29.
Jolly, Linda (2009) Læring om vårt daglige brød. En undersøkelse av pedagogiske opplegg
om landbruks- og matproduksjon for ungdomsskoleelever. Ås: Norwegian University for Life
Sciences.
Jolly, L. and Krogh, E. (2010) “School-Farm Cooperation in Norway:Background and recent
Research”. In J.Schockemöhle (ed.): Conference Proceedings, First Conference of the
Academic Initiative on Farms as Sites of Learning 2010. Academic foundation of learning on
Farms, June 10-12. 2010. Altenkirchen (Ww.), Evangelische Landjugendakademie
Altenkirchen, pp. 5-20.
Jolly, L. and Krogh, E. (2011) “Making Sense of Place: School-Farm Cooperation in
Norway”. Children, Youth and Environments, 21(1): 310-321. Available at:
http://www.colorado.edu/journals/cye
Kolb, D. A. (1984) Den erfaringsbaserede læreprocess. In K. Illeris (red) (2000). Tekster om
læring. Roskilde Universitetsforlag, København.
Malone, K. (2008) Every Experience Matters: an evidence based review of the role of
learning outside the classroom on the development of the whole young person. Stoneleigh:
Farming and Countryside Education.
Merleau-Ponty, M. (1962). Phenomenology of Perception: An Introduction. [Originaltittel:
Phénoménologie de la perception]. Humanities Press, New York.
Milton, K. (2002). Loving Nature. Towards an Ecology of Emotion. London: Routledge.
Percy-Smith, B. et al. (2009) “Exploring the Role of Schools in the Development of
Sustainable Communities”. Full Research Report ESRC End of Award Report, RES-182-25-
0038. Swindon: ESRC.
Risku-Norja, H. and E. Korpela (2009). School Goes to the Farm: Conceptualisation of
Rural-based Sustainability Education. Paper presented at the European Science Education
Research Association conference in Istanbul, Turkey.
10
Smeds, P., E. Jeronen, S. Kurppa, and M.L. Vieraankivi (2011). “Rural camp school eco learn
– Outdoor education in rural settings”. International Journal of Environmental and Science
Education. Vol. 6, No. 3, July 2011, 267-291.